My Mother and I traveled a lot when I was a kid. She supported us as as a seamstress, making life size soft-sculpture birds and selling them at craft fares all over the Western United States. Her creations were amazing and beautiful, the swans elegant and trimmed in white lace, the mallards finished in shimmering green patches of velvet, the little granny hens (the best seller) decked out like a character from the Old West, complete with apron, bonnet, spectacles, and finished with a river-rock stuffed inside so they could be used as a door-stop.

We spent a lot of time in a van. Lots of long drives, lots of set up a tear down, lot’s of meeting new people and making new friends in new places.

No surprise, then, that I’ve chosen a similar life for myself.

Touring is like being caught between the opposing forces of chaos and kindness. Constantly on the move, pack-up, pack-in, load-up, load-in, drive and do it again. It’s not for everyone, but for me, for as long as I can remember, this is the version of traveling that has always been the most comfortable. It’s travel with a purpose and a goal. A place to be and something to do.

I’m writing this from the the middle seat of a giant red 15 passenger van bombing down Interstate 5 somewhere outside of Bakersfield California. It’s hot, 106 degrees or so I’m told, and though we have AC, it barely keeps up with the natural effects of the California sun beating down on a giant metal box sitting on top of the unnatural asphalt. 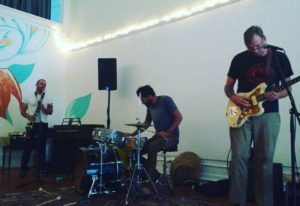 Last night we played in Oakland at a gallery called Studio Grand, sharing a bill with the imitable Jackie-O-Motherfucker. They bring tension and release in a way that few acts can, in a way that only musicians who have practiced listening can pull off. And I’m not necessarily talking about listening to each other, but the act of listening as a practice. In a way that collaborators can go months between practicing or even seeing each other, and still pick up in the right place, with the right feel.

Even though it’s part of the Bay Area Megalopolis, Oakland maintains it’s own distinct identity. It’s a working class town and a cultural melting pot in the tradition of the best cities. The West Coast of the United States exists in the place where Western Expansion, on the move since the times of Columbus and the Conquistadors, came to a gradual halt. The place where Manifest Destiny collided with the Pacific Ocean and exploded in gold rushes, land-grabs, and the gradual displacement of the Indigenous populations – both through attrition and many small wars of subjugation.

There’s no place like it on the planet Earth, and it has always been my home.

We left Oakland the same night, both for the safety of the van (it’s always sketchy to leave a van full of music gear on the street overnight in the Bay Area) and because we wanted to get a head start on the next days journey to LA. This has been common practice for me over the years when traveling through California, as my Grandparents have lived there my entire life. Until now.

This is the first tour I’ve been on since they both passed away, and so for the first time, taking a trip to their house wasn’t an option. It was bitter sweet, driving out of Oakland on the 580 to Stockton, realizing that for the first time in a long time, there would be no made-up bed and pot-roast with green beans and mashed potatoes waiting for me at roads end. Tonight it was a budget motel in Los Banos. (Still got my own bed though, a luxury when on tour).

My Grandfather always supported my career choice as a musician, and it meant a lot to me. He was a cowboy from Nebraska who broke horses and farmed until age 19, when he joined the army to serve in WWII. He was in the last division of mounted calvary (before calvary came to mean tanks) to exist and was stationed in what’s known as the China Burma India (CBI) theater of combat.

My Grandfather helped build the infamous Burma Road to supply the Chinese in their fight against the Japanese occupation. It was arduous work, made all the more difficult by frequent sniper and mortar attacks. In classic fashion, he came home from war to get married and move West, leaving the Sandhills of Nebraska for the fertile San Juaquin Valley, settling in Stockton. He worked as a conductor for the Western Pacific Railroad, including a time as the conductor of the iconic California Zephyr, considered one of the nicest trains of its time.

The modern car having truly come into it’s own in the 1950s and 60s, he took full advantage, piling all 3 kids and the family dog into the family station wagon to explore the wide open spaces that so define the American West to this day. This sense of wanderlust clearly rubbed off on my mother, and in so doing, on me as well.

Equally as important was the family home. A modest 3 bedroom in what was then the outskirts of Stockton, it served as the only family home I’ve known. Now located in what would be considered a less than desirable part central Stockton, my Mother and Uncle finally agreed to sell the house just a few months ago. I’m using the modest inheritance from the sale of that home to fund my upcoming travels and album releases.